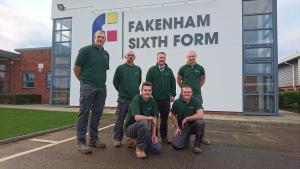 Six craftsmen from Fisher Bullen have returned to their former school to help refurbish and redevelop Fakenham Academy and its new sixth form, which officially opens on 1st November 2017.The employees were pupils who attended the school over the last four decades. Contracts Manager, Justin Howe, left Fakenham Academy in 1998 where he studied woodwork as one of his subjects. He later became a carpenter by trade at Fisher Bullen. The new Sixth Form replaces the former Library and Drama building and has been refurbished to create a new canteen, servery and student work space along with administration offices. Further development included a new music room, textiles room, a new library and the refurbishment of 3 science labs.

This website uses cookies to improve your experience while you navigate through the website. Out of these, the cookies that are categorized as necessary are stored on your browser as they are essential for the working of basic functionalities of the website. We also use third-party cookies that help us analyze and understand how you use this website. These cookies will be stored in your browser only with your consent. You also have the option to opt-out of these cookies. But opting out of some of these cookies may affect your browsing experience.
Necessary Always Enabled

Any cookies that may not be particularly necessary for the website to function and is used specifically to collect user personal data via analytics, ads, other embedded contents are termed as non-necessary cookies. It is mandatory to procure user consent prior to running these cookies on your website.